This Biggest Bud seed is feminized and photoperiod. That means, the seed will produce only female plants, that need their lighting schedule ajdusted, to get them into their flowering phase. It can also be cloned.

Its genotype is mostly indica. It is a mix of Northern Lights #1, Afghani indica, Big Bud and Skunk #1. The first clone-only Biggest Bud was a sturdy Afghanica infused with Skunk genes - a hybrid possessing amazing vigour and unexpected, record-breaking production, with high percentages of THC. Its ancestors have really taken care of making this strain almost pure indica, with amazing finish product.

This strain can be grown indoors or outdoors. You can expect bushy plant with dark wide leaves, that is medium to tall in height. Overall, Indicas are much quicker at providing results comparing to sativa. That is why Biggest Bud will provide results after 7 to 8 weeks when grown indoors. It will produce around 600 grams per square meter. When grown outdoors  you can expect the plant to be ready for harvesting in the end of September or beginning of October. Outdoors, it usually produces around 500 grams per plant. On both small and large plants, flower clusters are huge, sparkling, and wonderfully solid.

Biggest Bud has always been famous as a cannabis strain with staggering yields. Resin production is prolific, even on the inner surfaces of flower clusters, making for a powerful physical stone that´s brightened by the high of Skunk´s Sativa ancestors. The buds can contain around 18 % of THC and 0.83 % of CBD. They have citrusy, earthy and piney aroma and taste.

Because this strain is mostly Indica, it has mainly effect on the body, making you sleepier. You can also expect to get munchies – also known as sudden and random feeling of hunger. Users have reported, that the strain can also cause euphoric feelings.

Its superior Indica pedigree was carefully refined and steadily improved over many years and has now been perfected for release as an all-female seed strain! As with the regular version, enormous production remains the central feature of feminised Biggest Bud. 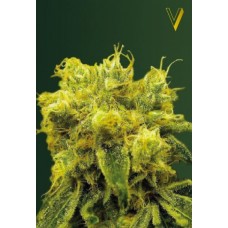 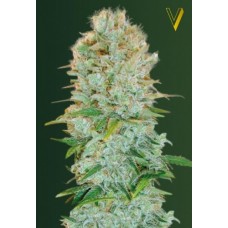